This document will explain step by step to analyze adaptive cursor sharing.

Let’s start with the basics. Let’s create a table as a copy of dba_objects.

Now, if we run a query like ‘select object_name from t where object_id=1027’, then it must go through the full process of hard parsing. Each time we put a literal as the object_id value, Oracle sees it as a new statement and does a hard parse. And as we know, a hard parse is an expensive operation, one that we must try to avoid as much as possible. Major problems that result from using literal values include the following:

Okay, let’s first run the following three queries, each one using a different object_id, i.e. a new literal for each statement:

select object_name from t where object_id=1027;

select object_name from t where object_id=1028;

select object_name from t where object_id=1029;

So far, so good. So, let’s check how Oracle internally views each of these statements. For that let’s run the following statement:

And we can see the query of V$SQLAREA shows that the three statements require three different parent cursors. As shown by VERSION_COUNT, each parent cursor requires its own child cursor.

So, to overcome the problem of hard parsing every time, we can use bind variables to share the cursor.

Let’s have a look at the following example:

The VERSION_COUNT value of 1 indicates that the database reused the same child cursor rather than creating three separate child cursors. Using a bind variable made this reuse possible.

Let’s see whether supposedly similar statements can produce different execution plans or not.

Let’s first create an index on the object_id column of the table t.

create index i1 on t(object_id)

Then let’s run the following three statements and see the execution plan for each one of them.

In the third case where we are selecting a significantly larger number of rows from the table, the optimizer considers a full table scan more efficient than an index scan, thus validating what we were guessing-that execution plans do change for ‘similar-looking statements’ but with very different literals.

But before we move ahead let’s check the same three statements using bind variables. As a preparatory step before actually running our queries, let us flush the shared pool and buffer cache, just so we are sure about the results we get.

It is clear that Oracle continues to use the plan developed during the initial hard parse, even though we know the INDEX RANGE SCAN is not the most optimal plan for object_id<19000, as we already saw a FULL TABLE SCAN occurring when we gave the optimizer the benefit of literals in the earlier example.

So herein comes the benefit of ADAPTIVE CURSOR SHARING. In adaptive cursor sharing, the database monitors data accessed over time for different bind values, ensuring the optimal choice of cursor for a specific bind value. Let’s say the optimizer chooses a particular plan for bind value 1000, then it can very well choose a different plan for bind value 19000, which may be relatively the more optimal plan for that value of the bind variable.

Adaptive cursor sharing works only if you are using bind variables and have a histogram on at least one of the columns that is being used in the WHERE clause of the query.

Let’s create a new table ‘S’ as a copy of dba_objects and gather statistics on it as well as create a histogram on the object_id column.

The next step would be to run a query on this table using a bind variable.

With Adaptive Cursor Sharing, two additional columns are there in V$SQL. IS_BND_SENSITIVE and IS_BIND_AWARE. A bind-sensitive cursor is a cursor whose optimal plan may depend on the value of a bind variable.

The optimizer uses the following criteria to decide whether a cursor is bind-sensitive:

Let’s try one more time with a bind variable value not too different from what we used earlier:

The cursor continues to be bind sensitive. Now, let us do something different. Let us use a bind variable value which is significantly different, and let us see what we get:

What happens if it doesn’t fall in the range of stored cardinality? In that case, Oracle does a hard parse and creates a new child cursor with a different execution plan, stores metadata about the predicate, including the cardinality of the bound values, in the cursor and executes the cursor.

So, the essential point here is, we now have two child cursors catering to two different sets of bind variable values.

Great! What next? Here it starts getting really interesting. Let’s say we now use a bind variable value which doesn’t match the stored cardinality of the existing child cursors, so the optimizer goes through the painful process of hard parsing and creates another child cursor which it then executes. Assume this execution plan used an index. Oracle then checks and sees that one of the existing child cursors had also used an index scan. Oracle now tries to optimize things by merging the two child cursors containing index access plans. This implicitly involves storing the combined cardinality statistics into one child cursor and deleting the other one. This is really efficient, because instead of two child cursors, we now have one child cursor which can be reused, and it sores the combined cardinality of more than one bind variable value.

So, in conclusion it can be said that Adaptive Cursor Sharing is a really cool feature in Oracle that allows us to use to use Bind Variables in an unfettered way, leveraging the reuse of child cursors without having to compromise with living with suboptimal execution plans. 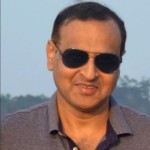 I have a deep understanding of Oracle databases, Engineered Systems like Exadata, the Cloud, Cloud security and BLOCKCHAIN. I bring to the table more than twenty years of technical and business expertise. In my current role I help customers manage IT infrastructure costs better by working with them to either build a cost-optimized solution or take an existing solution and rework it to provide the best cost benefits without compromising on performance, security or otherwise. In the recent past I have: -Helped transform and upgrade the database and infrastructure of one of the leading telecom service providers in the US-T-Mobile-to get a 99.999% uptime. -Been part of the team that worked on setting up a Disaster Recovery mechanism for AT&T-another leading telecom service provider in US. -Successfully conducted a Proof of Concepts (PoC) in Ericsson for migrating workloads from Exadata to Oracle Cloud Machine (OCM) and conducted performance benchmark tests post migration. I thrive on being able to match technology with business requirements to provide a cost-effective yet elegant solution to the customer. I have very strong written and oral communication skills, and I am especially strong in producing very high quality technical documents. As I often need to communicate with different stakeholders, I have developed the ability to explain technical solutions in non-technical terms, sometime drawing analogies, but always without diluting the essence therein. I have lots of experience in leading internal, external and cross functional teams, and have frequently provided them with guidance, thought leadership and mentorship. I see myself as someone who is deeply into technology, yet with the wherewithal to understand the nuances of business and strategy and able to contribute very significantly to any organization in terms of: -Strategic Initiatives Pre-Sales Consultancy Solutioning https://www.linkedin.com/in/saibal-ghosh-ccsk-prince2-%C2%AE-469b0a7/